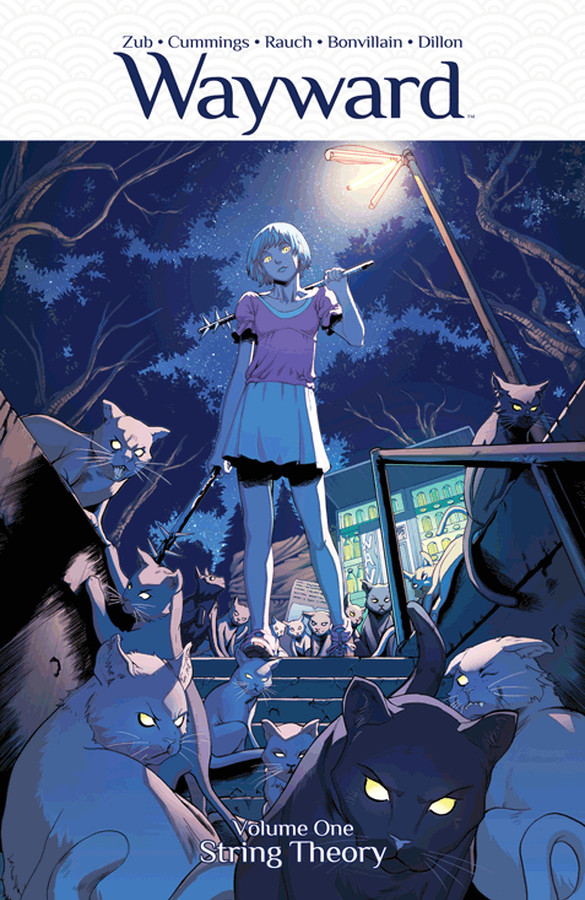 While browsing my local library last week, I came across a series I’d never seen, never even heard of before: Wayward, written by Jim Zub and with art by Steve Cummings. What caught my eye were the covers of the trade paperback–what I’m using as a feature image is excellent, but some of the others are even better!

This book was enormous fun. Our main character is Rori Lane, a Japanese-Irish teenager moving into Tokyo, Japan to live with her mom a year after her parents separated. Rori is emotionally confused, a little messed up, and out of her element, but that’s all natural when you come into a brand new country and way of life you’ve never experienced.

What’s unnatural are Rori’s abilities. She keeps seeing a weave with an unnatural reddish glow, which guides and even draws her to others much like herself, young teens with similar but distinct abilities. Should I call them spiritual or supernatural? Perhaps the former, as this is–again–steeped in Japanese folklore. Rori and her new friends come together to figure out what the hell is going on with them, and find out a whole lot more than they bargained for.

There’s plenty I love here–mystery and action, complex family dynamics and a villain that sets my teeth on edge. The cast of characters is wonderful; my favourite one might very well be Ayane, the strange, blue-haired girl on the cover of the first volume, dextrous as a cat, and capable of going anywhere a cat can go. She even has some transformative powers which look stunning on the page, thanks to some gorgeous colour work by Tamra Bonvillain (incidentally the best family name you could ever have).

This is such a fascinating story because, while it is written and drawn by Americans, it has a very authentic Japanese feeling to it. The city of Tokyo is rendered faithfully, its streets and spaces come to life beneath Cummings’ pen with a degree of versimilitude that I did not expect to encounter. There’s a wonderful sense of geography in place here, which grounds this in our modern world as much as in that of spirits and yōkai.

This has all the trademark beats of a coming-of-age story for Rori and her friends. Yet, it promises more than just that–and I’m all too eager to explore Wayward further.