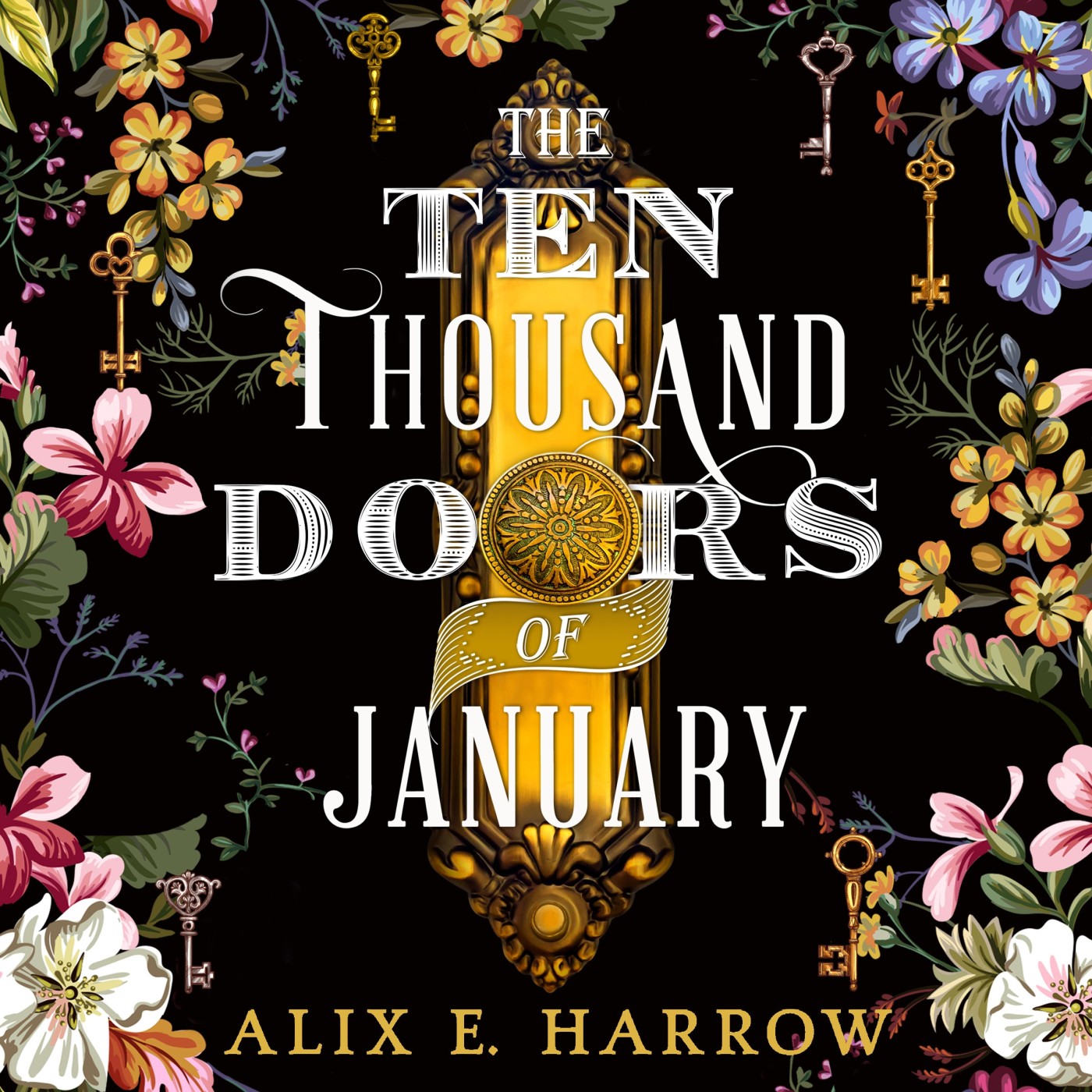 This review was originally published over at Booknest.eu.

In Alix E. Harrow, I see a respect for stories and words and the power they hold equal to that of Ursula K. Le Guin. If you’ve followed me awhile, you know the depth of this compliment and if you haven’t, boy, have I a few recommendations for you. But this isn’t about Ursula, it’s about The Ten Thousand Doors of January, a novel that takes a magnifying glass and points it at the connection between stories, the worlds they originate from and those who are brave enough to explore them.

January Scaller is a unique girl, though in what way may not become readily apparent. True, she is “a perfectly unique specimen,” as her guardian, Mr. Locke puts it, a child grown up under the wing of this most affluent personage. “A perfectly unique specimen, odd-colored perhaps but not colored” is the description this man, almost a father to her, gives January early on. It is the turn of the 20th century, and this is America – if you needed a reminder of the disquiet, the sheer horrible racist reality of that time, the following sentence, from the view of a seven-year old, encapsulates it well: “I didn’t really know what made a person colored or not, but the way he [Mr. Locke] said it made me glad I wasn’t.” See, in only a few paragraphs, Harrow has given us a conflicting view of the man January considers a father figure.

Not that January doesn’t have a father; it is merely that he, Julian Scaller, spends most of his time tracking treasures and rare objects for his employer, the very same Mr. Locke. Cornelius Locke is something of a collector, you see, and his home would make even the Smithsonian seem an enthusiast’s collection by comparison. January’s father is his most successful agent, owed to Julian’s ability to follow stories to their source – the stories of people and of places, the origins behind their myths

It is a talent his daughter seems to have inherited, for it isn’t the dotting of a millionaire that makes her “a perfectly unique specimen” but the hunger she feels for stories and adventures, for the world outside the confines of Locke House. Like many of you who now read this review – like me – January escapes the tedium of her everyday reality through novels – penny dreadfuls and adventure stories, the horror and excitement of the grotesque. And when, on her seventeenth birthday, life throws at her the very worst it has to offer, it’s into a book that she escapes.

“…(see how that word slips into even the most mundane of stories? Sometimes I feel there are doors lurking in the creases of every sentence, with periods for knobs and verbs for hinges).

The Villains (see the shape of the V, how it places opposites on its two ends, mirroring one another and yet different?) of The Ten Thousand Doors of January range from the universal gothic of the time period to the deeply personal, the kind of villain to kill for – if you’ll pardon the pun.

Its the language, the melodious nature of it that is enchanting to the reader. The masterful control over character voice is equally impressive – a sizable portion of the book adopts the tenets of an epistolary novel, making use of a voice very different from January’s own:

The following monograph concerns the permutations of a repeated motif in world mythologies: passages, portals, and entryways. Such a study might at first seem to suffer from those two cardinal sins of academia—frivolity and triviality—but it is the author’s intention to demonstrate the significance of doorways as phenomenological realities.
At least, that is the book I intended to write, when I was young and arrogant. Instead, I’ve written something strange, deeply personal, highly subjective. I am a scientist studying his own soul, a snake swallowing its own tail.

Harrow’s use of these chapters to tell several stories serves to pace January’s own tale and to create additional tension early on,

I return then to Alix Harrow’s respect of words, captured best in the following: “Words and their meanings have weight in the world of matter, shaping and reshaping realities through a most ancient alchemy.”This is at the heart of our culture, did you know? Our society and we as members of it, invent and reinvent ourselves through the process of the word, written or spoken. Our civilization rests on the written word, where many have perished before, their words once spoken but no longer heard. And this novel gets it, understands the importance of words and their ability to change minds and hearts and the paths we make for ourselves.

There’s also the emotional connection – something deeply individual for all readers – but the novel and its characters, their suffering and loss and love and joy as they realised themselves in full, all this found resonance in me. About mid-way through, I even teared up, and there’s nothing like a few tears to illustrate how deeply you connect to a text on an emotional level.

I’m under the impression that this novel is a standalone – and I would like to praise the author for her choice; The Ten Thousand Doors of January accomplishes in one book what many series don’t manage in three – a complete story from beginning to end, which leaves the door…not sealed, not entirely, but firmly closed.

I give The Ten Thousand Doors of January a score of 5/5 stars; if I were using a ten-point system, I’d give it a 9.5 out of 10 because the ending plays it a little bit too safe and the epilogue, while a wonderful way to say goodbye to the characters, wasn’t necessary. Almost as if Harrow wanted one last moment with these characters – something I can hardly blame her for.

My recommendation goes out to all those among you who are in love with the magic of words and stories, those of you who feel a certain disquiet when they think of having to spend a lifetime going through the motions; The Ten Thousand Doors is for adventurers and travellers and seekers. Take a look – I wager you won’t regret it.

The second book in Mark Lawrence's Book of the Ice trilogy, The Girl and the Mountain picks up directly where The Girl and the Stars' cliffhanger left us reeling. It's perhaps the easiest novel I've read this year, and if you wanna find out why...better watch the video on my YouTube channel!
Today's Wyrd and Wonder tag is "I Never Knew My Father"! I hope I'm not cheating by having the Assassin's Apprentice Illustrated Edition pictured a second day in a row, but hey, there's also R. F. Kuang's THE BURNING GOD! It's a special day for me, because Kuang also announced a brand new novel on Twitter today, BABEL - I'm beyond excited to know more about it. At any rate, both books feature protagonists who never got to know their fathers, either because of war or over politics. Those kids are totally not screwed up. Honest! ┌( ಠ‿ಠ)┘
Today's Wyrd and Wonder tag is #MapMonday! The map I decided to showcase today is the one from the gorgeous Assassin's Apprentice Illustrated Edition by Robin Hobb!
Today's #wyrdandwonder tag is "Pop this in your book bag!" (A book you’ve read since last year that you’d recommend to everyone.) To Dream and Die as A Taniwha Girl is definitely a book I'd recommend to everyone - as are Benedict Patrick's Yarnsworld novels overall! The tale of a young woman thrust with the responsibilities of godhood is nothing short of an emotional roller-coaster and I cried buckets while reading it. So will you!
It's May, which means it's Wyrd and Wonder month! This month-long event meant to celebrate the fantasy genre is hosted by @imyril - I got roped into it by my dear friends at @thefantasyhive. Plenty of wonderful pictures coming from @nils.reviewsit , @juliakitvariasarene , and many, many others - browse through the #wyrdandwonder tag, why dontcha? :P
Artificial Condition was a great jaunt back into the world of the one and only Murderbot. Martha Wells pulled no punches with this one and by the end of it, I knew I was well and truly hooked - which is why you can expect reviews of the next pair of novellas in the coming weeks! Rejoice, viewers and instagramsters!