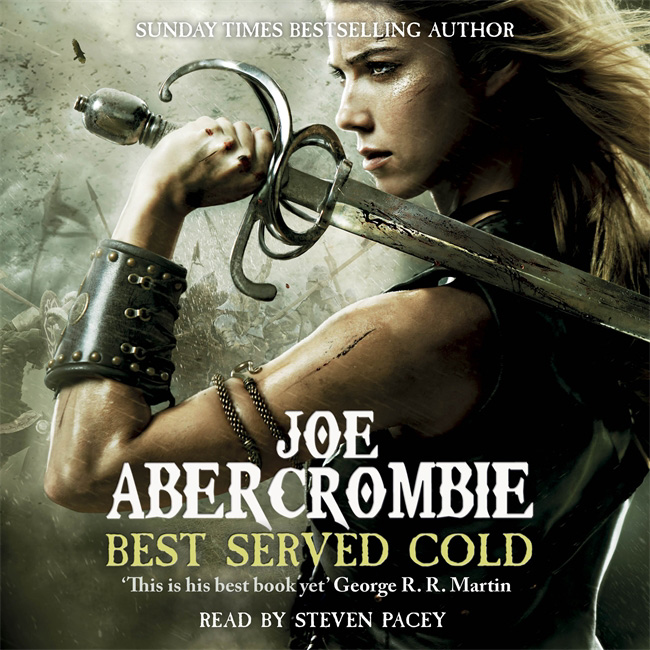 You read it here first, folks. I’m doing a book tag! I saw this tag done over at Bookdragonism and I decided I HAD TO HAVE SOME OF THAT ON ME BLOG! It’s about books, it has so many needlessly convoluted categories and I love every single one of them, so let’s crack those knuckles and get categorisin’!

Giving me the impossible choices first, eh? Whichever one I pick would be followed by wheeping, regret, a minute-long search for forgiveness from my own personal gods and an eventual acceptance that I will never find the favourite book this category demands.

If you haven’t read Abercrombie…you should. It’s better than doing drugs, I’ve been told. That said, running out of Abercrombie novels is an agonising experience.

What’s Best Served Cold about? A brilliant general by the name of Monza Murcatto is betrayed by her contractor and left for dead only to survive under the unlikeliest circumstances. From this point onwards, Monza gathers up a team of murderers, poisoners and unhinged mercenaries to exact her revenge on the men who betrayed her.

It’s the Count of Monte Kristo on drugs!

The end of Fitz and the Fool’s adventure was the most I’ve cried over a book in…well, since just about any other Robin Hobb novel. There’s something about the way she writes that squeezes every emotion out of me; Hobb takes her time to build up these real, three-dimensional characters full of emotion…and then she drops the hammer. It’s not G. R. R. Martin twists I’m talking about here, it’s something that runs much deeper, a succession of events that touches you so profoundly that it changes you.

Have you heard the good news? The Black Company will soon have a TV show of its very own, helmed by Eliza Dushku. If that doesn’t excite you, you might not be familiar with The Black Company and the influence it has had on the fantasy genre. This is the series that, more than any other, paved the way for the grimdark subgenre of which some of my favourite books are part of. Steven Erikson, writer of the great Malazan book of the Fallen, drew inspiration from the Black Company — as have many others, myself included. The Black Company’s first three books are an absolute fantasy classic written in a prosaically economic style and filled with unforgettable characters.

Josh Erikson’s Hero Forged series of urban fantasy novels is one of my favourite discoveries of this year. Fate Lashed, the second book in the series, continues the fantastic dynamic between main character Gabe and his special succubuss friend, Heather. They’re not quite a couple per se, but they’re cutter than anything I’ve come across, that I can promise you. The dynamics between these two characters are the emotional center of the series and…it’s one of the best relationships I’ve come across in many, many years of bookwormin’.

One, Monza Murcatto from the aforementioned Best Served Cold. Two, Tattletale and Skitter from one of the most brilliant works of fiction to ever grace the Internet, Worm. Skitter and Tattletale are each brilliant and dangerous on their own, the two combined become an unstoppable force. Skitter controls bugs, her ability allowing her to pick up and unpack the information they relay to her. She’s also got a tactician’s mind, allowing her to use all that info to deadly and glorious effect! Tattletale, meanwhile, has an amazing powerset that’s…the coolest. I won’t spoil it in case you decide on reading for yourself but the two of them together…wildfire.

I have difficulty believing anyone could ever surpass the sheer scale of the world created by Steven Erikson and Ian C. Esslemon. The Malazan Book of the Fallen series is amongst the most ambitious stories ever told; its scale is mind-boggling and humbling. I burned through the flagship ten-book series and have barely touched the world since, but there’s nothing quite like this dark, gothic world, filled with unforgettable characters, breathtaking magic, and a message of mercy, humility and salvation that’s like nothing I’ve ever read.

Aphrodite (Goddess of Love and Beauty) – Most gorgeous cover

Benedict Patrick weaves wonderful folktales in his Yarnsworld. The novels in that world get better and better — Benedict is one of those authors whose skills you can observe growing further and further, and that’s wonderful. In addition to that, he’s got a brilliant cover artist! The cover above is stunning, isn’t it? The other covers follow this template but each one has a twist of its own, and they’re all the sort of thing you want to make a poster out of and stick it up a wall! Oh, there’s an idea to offer Benedict…

The Malazan Book of the Fallen, again. The violence here is brutal, and worse. It reflects the best AND worst of what humanity is capable of; but every time violence is used, it is used for a purpose. Often, brutal, horrible things happen in the world of the Fallen; it’s a dark place, filled with merciless and powerful individuals.

I’ve waxed lyrical about Monstress over and over. Maiko Half-wolf is one of the most badass protagonists currently in print — hard-headed, possessed of incredible willpower and broken by the horrors she has been through. Anyone stupid enough to take on her is doing so at their own peril.

Apollo (God of Music, Light, and Healing) – A Book that is the exception to a genre you don’t like

Hermes (god of messages, travelers, and thieves) – A book that stole your heart

How can the plight of a man who loses his wife and is forced to undergo an utter transformation in order to find her in a tower ruled by corruption and iniquity do anything less? Josiah Bancroft’s story not only stole my heart, it stole my imagination, as well.

Any of Yahtzee Croshaw’s audiobooks are comfort food for Bad Times*TM*. Yahtzee is unapollogetically funny in his ZeroPunctuation reviews, and he’s also a gifted developer, if his recent Developer Diaries are anything to go by. He’s also a talented writer–though his very first novel didn’t grab my fancy, both “Jam” – a story about strawberry-scented cannibalistic jam — and “Will Save the Galaxy for Food” made me laugh uncontrollably for hours upon hours.

I’m probably toothing Steven Erikson’s horn too much here, but hell, if anyone deserves it, he does! Besides, a wonderful setting and brilliant worldbuilding go hand-in-hand.

I wrote about this book on reddit and got nearly 500 upvotes! I love Brian’s flintlock/epic fantasy world, and there’s so much I want to say here but…I’m working on an essay to share my thoughts in full.

I know I’m repeating myself, but there’s no way around it.

Pure, undeniable catharsis. I swear, my tear glands were working on overtime, that’s how emotional and powerful this conclusion is.

Iris (Goddess of the Rainbow) – A Book with LGBTQ+ Main Characters

What a great effin’ debut this was. The main character, Mahit, is a human in an inhuman society, hungry and distrustful of it all at once. Poetry and beauty conceal a politically complex theatre of intrigue in A Memory Called Empire, and if you’re interested in reading more about it, you should click here for my review.

I could have picked any one novel by Brandon Sanderson — all of his magical systems are well known for their uniqueness and internal logic; Brian McClellan is a disciple of Sanderson’s, in that he did his Creative Writing course and the style Brian writes in is reminiscent of Brandon’s. Powder Mage and its sequel trilogy, Gods of Blood and Powder, has not one, not two, but three unique magic systems; the first destructive and based on elemental control; the second is the eponymous powder based magic system, which enhances the abilities of these mages far beyond the abilities of your everyday human; and the third one is a sort of blood magic, which is scary. Very, very scary.

“The Wheel of Time turns, and Ages come and pass, leaving memories that become legend. Legend fades to myth, and even myth is long forgotten when the Age that gave it birth comes again.” I have read about the spinning of the wheel more than once and it is…the most nostalgic world for me. More than Harry Potter, Lord of the Rings, Mistborn, Amber. Rand, Perrin, Matt, Nynaeve, Egweene and everyone else’s adventures

Wellp! That sure took a while, but it also gave me plenty of reasons to wax lyrical about the wonderful, miraculous world of HORRIBLE TERRIBLE HIGH FANTASY NOVELS THAT WILL EAT YOUR SOUL AND FESTER IN YOUR MIND. You should read all the books I mentioned, is wot I’m saying.