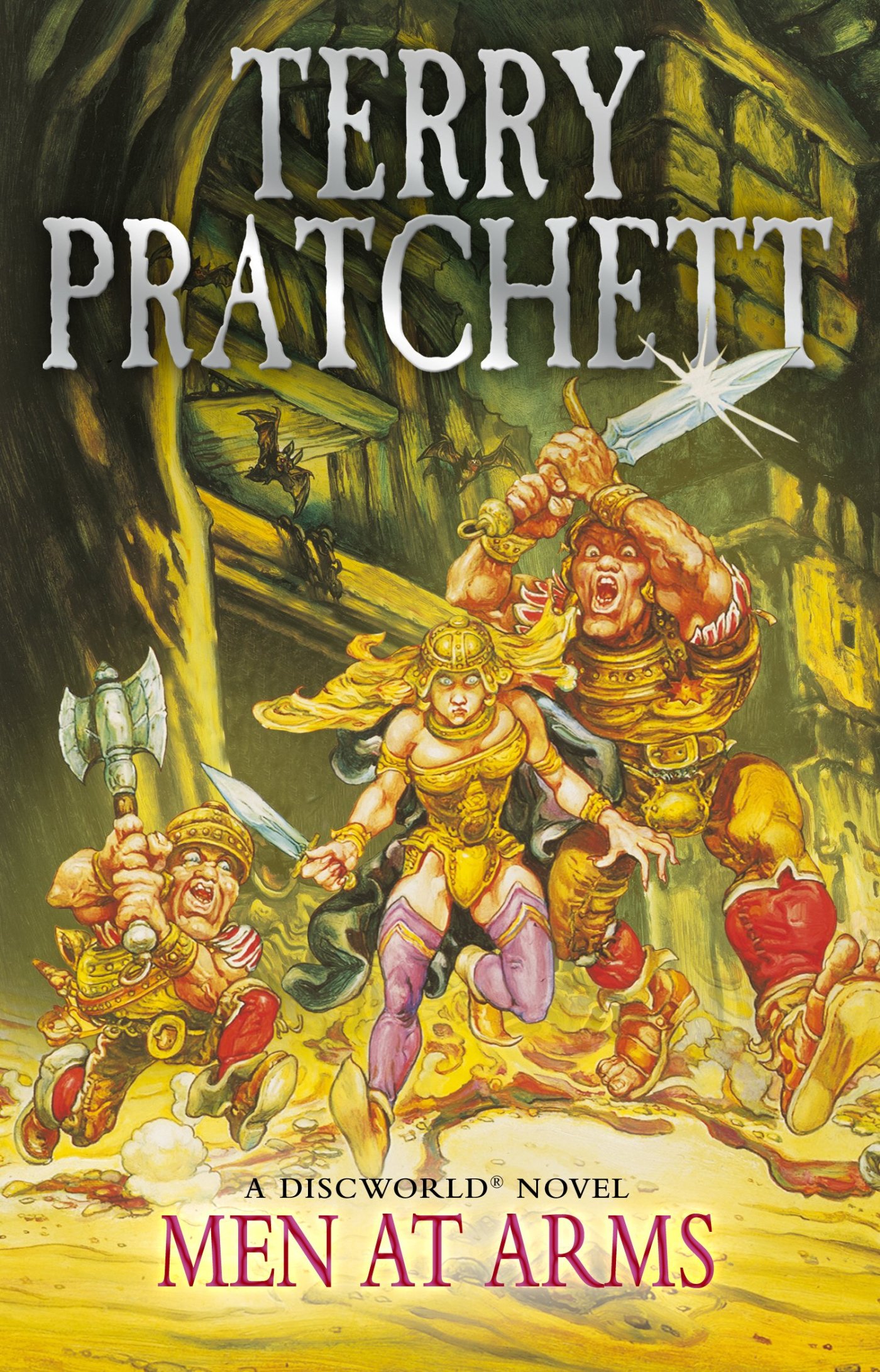 What you’ll get from a Terry Pratchett novel often corroborates to the work you put into reading it. If you’re looking for witty entertainment and humour, you’ll find them in spades, on the outermost layer of virtually all of his novels. When you dig in, there is so much more. Take Men At Arms, for example.

Pratchett’s fifteenth Discworld novel is about the dangers inherent to possessing power, in this here novel in the role of “the gonne”. It’s about racial conflict and how senseless it is. Prejudice, too. (Trolls are guilty. What for? They’re trolls! They’re guilty of something!) It’s about wolves, how they are, and how dogs think they are. It’s about a man who loves his job and feels like he has to give it up in order to be something else, and the lesson he learns.

But at the end of the day, it’s about another man, a simple man, a man trying to sell his sausages at prices that might as well be cutting his own throat.

For Captain Samuel Vimes, things are changing. Commander of the Night Watch, going through his last days on the force before his wedding to the richest noblewoman in Ankh-Morpork, Vimes is understandably a wee bit out of it. But fear not, the good old captain still has a few tricks left up his sleeve. Some of his story beats were delightfully subversive to ye oldé detective cliché, courtesy of the masterful Pratchett twists. In a moment familiar to all fans of detective stories and bad 80s cop movies in particular, Vetinari (Patrician of the city and scariest, cleverest, Machiavelliest man alive) demands that Vimes hand over his sword and badge. It’s funny but it serves to do more than just lark on a genre mainstay; it plays off of what we know about both Vimes and Vetinari’s characters, the one pushing the other’s strings. But even Vetinari isn’t immune to the occasional miscalculation. While attempting to manipulate the good captain, he pushes a shred too far. The result? We get to see the great Patrician squirm for a minute there.

Men At Arms had a few unexpected gut punches. Character deaths came sudden and unexpected, jarring me awake from what often felt like a pleasant reverie filled with Pratchett’s signature humor. Death, or the threat of it can certainly sober most readers up and get the grey matter flowing.

Satire of racial hatred feels poignant, true to Pratchett’s style.  Trolls and dwarves are enemies, and humans see both as equally bad. The Watch’s policy when it comes to crimes, I already mentioned at the start of this review. A man who lives by that philosophy is Vimes’s counterpart, Day Watch Captain Quirke. He’s another character worth keeping an eye on. Quirke is a sort of the anti-Vimes, a lazy, uncaring slob who couldn’t solve a murder if it was his own, and the perpetrator was stabbing him head-on. I feel like Pratchett is going to do something interesting with this one, though.

I absolutely loved the new recruits, three exemplary Lance-Constables of the Watch – the dwarf Cuddy, the troll Detritus and the were…woman Angua. Detritus is the closest yet we’ve narratively been to a troll in the Discworld, and thanks to him we learn a lot about this race of sentient rocks – did you know, for example, that they have silicone brains? Or that they are really quite smart, long as you make sure their brains are cooled down. No, neither did I. Cuddy is fantastic and I loved every minute with him; the two together make for one hell of a funny duo, kind of like Legolas and Gimli in Lord of the Rings. They start from a point of fond dislike over a history of racial hate, only to realize they have a lot more in common than they’d like to admit. And then, eventually, friendship!

Ankh-Morpork is as vibrant as ever. All its guilds, its different cultures and factions are as much a gunpowder keg as always, and the way it all blows up this time around presents a hell of a good story. One of my favourites, in fact. For that reason, I give Men at Arms a score of 5/5!

You’ll enjoy this book if:

3 thoughts on “Men at Arms by Terry Pratchett – Book Review”