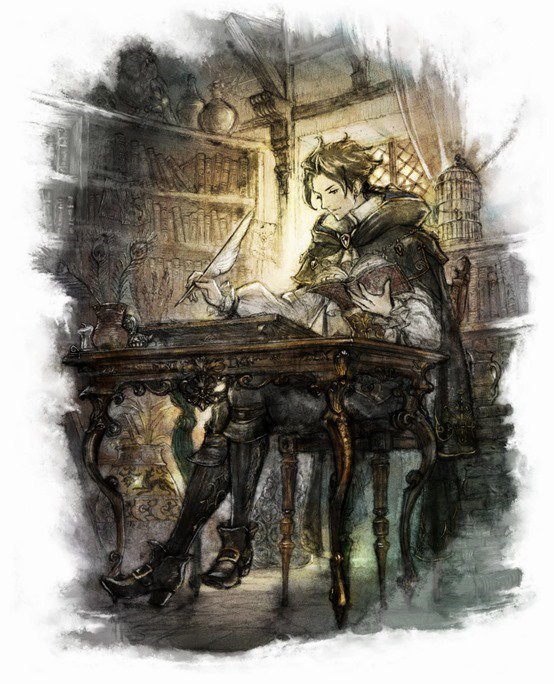 Too long has it been since I last wrote about video games. Nothing like a big-ass jRPG to strike a vein of inspiration, and so here I am, working on this brand new series of impressions, thoughts, and the occasional criticisms (if I find something I’m unhappy with).

Octopath Traveler begins with a choice between eight unique characters. A warrior, a thief, a merchant, are but a handful of these; for my choice, I picked the Scholar, Cyrus.

And here he is in-game. Quite the lively sprite, wouldn’t you say?

Cyrus fills the combat role of Red Mage in most jRPGs, dealing with elemental magic — fire, ice, lightning — but far more interesting is his personality. A brilliant scholar and a fine enough professor to tutor a Royal Princess, Cyrus is also an impressive investigator in his own right, capable of figuring out a veritable gold mine of information on just about every NPC he meets. The Sherlock Holmes references are a great deal of fun, as well.

Cyrus has the very cool Scrutinize “Path Action,” the Holmes-like investigative ability which unlocks hidden treasures and discounts, and provides details on a variety of the different NPCs I came upon.

Cyrus gets in trouble with the Arch Lector of the university he works at pretty early on — the reason for which made him instantly likeable to me (as if the sexy, smooth voice wasn’t enough!). Cyrus’ latest research paper freely discusses some of the University’s greatest secrets. Cyrus believes knowledge should be freely shared with all; the Arch Lector firmly disagrees. But Cyrus is smart enough to hide his displeasure. Oh, I have been in your shoes, friend.

At the same time, a number of valuable volumes have disappeared from the most inaccessible part of the university Archives; Cyrus takes up the job of discovering just who the perpetrator of this heinous act is.

Hint: it’s another researcher with gambling debts all the way up his arse. He’s been selling these volumes on the black market, the knob! After some arcane beat-down, the perpetrator spits out a list of all the potential buyers, and all ends well… Until, that is, a single arcane volume is left unfound. And this one has been missing for a great deal longer than the rest — 15 years, in fact. Soon as Cyrus finds that out, he is all but seduced by the mystery of this missing tome. What a book worm! (Takes one to know one, I s’ppose).

When he’s summoned by the Arch Lector once again, and summarily dismissed over the rumour he’s begun an elicit affair with one of his pupils, the aforementioned Royal Princess, Cyrus is all too happy to leave, seeing this as the perfect excuse to pursue new avenues of knowledge out “in the field,” as he puts it.

It’s just sad his reputation took a bit of a hit, on account of this ugly rumour. And why? Cyrus’ other pupil got jealous over him responding to all the Princess’ questions and giving her more of his attention. He quickly deduces that, though of course he remains blind to the obvious fact this girl is crushing hard on him. Oh, Cyrus, do you really think someone would go to all the trouble of getting you into trouble over this:

Her response was perfect: “On second thought, Professor, maybe you’re not as bright as I thought you were.”

With this, Cyrus marches ahead in this beautiful pixelated world, and I moved on to collecting my very first companion, the merchant Tressa! Her first chapter we’ll discuss come the next chapter of my Octopath Traveller chronicles! Pirates, wine, and a mysterious blonde Captain, all coming up next time!

Sidenote: Cyrus is voiced by Steve West, whose voice I swear I’ve heard in either anime or gaming before!

Join 827 other subscribers
Follow The Grimoire Reliquary on WordPress.com