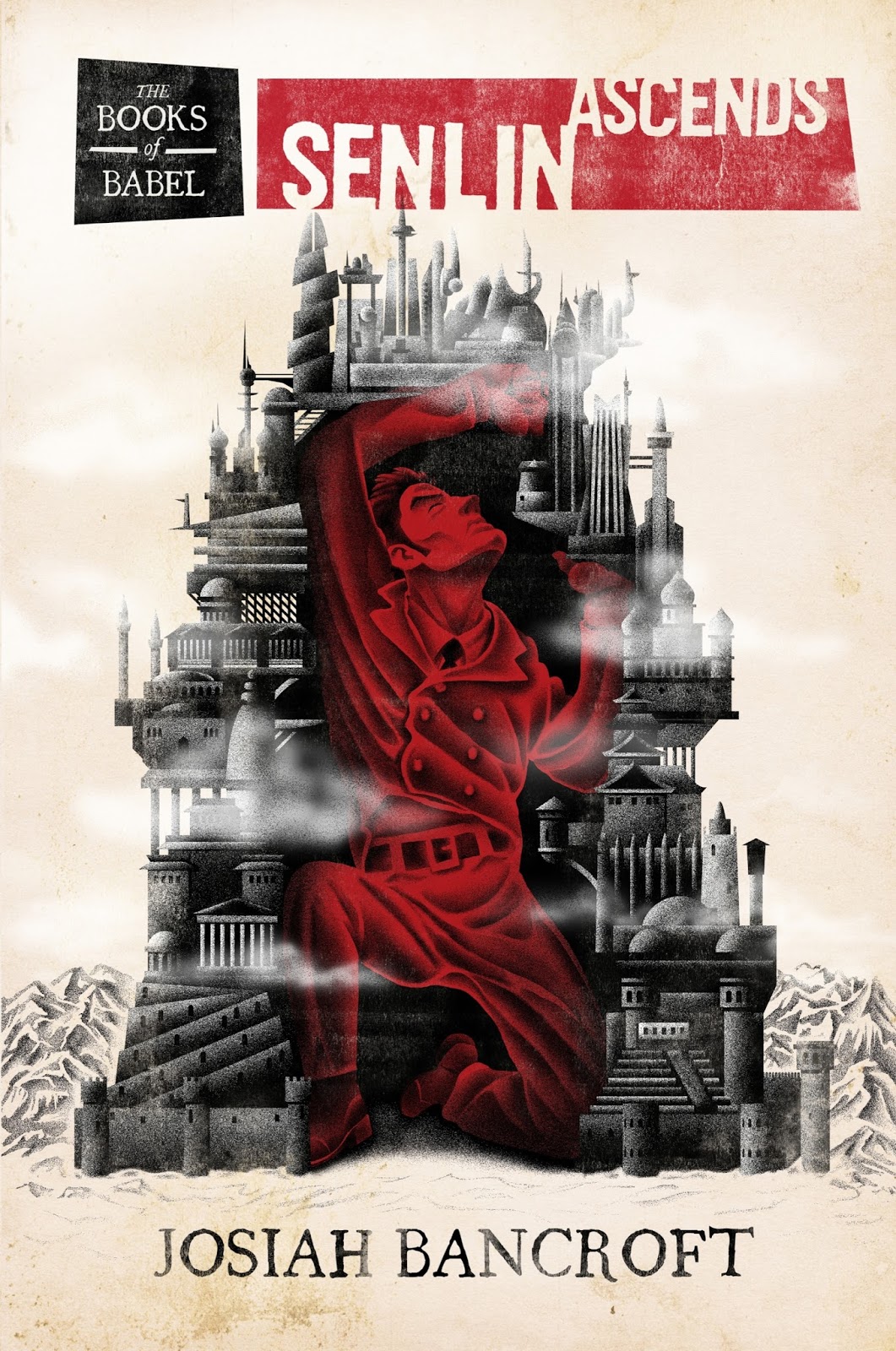 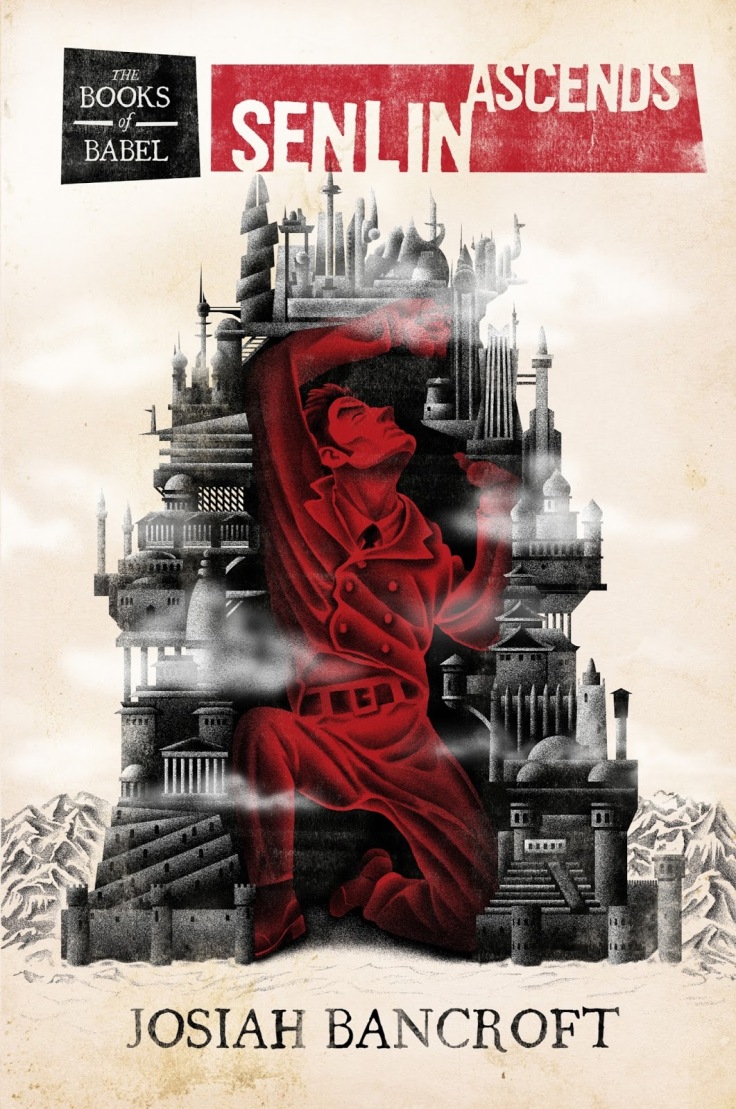 I’ve had some trouble putting my thoughts in order where Senlin Ascends, the first book in Josiah Bancroft’s Books of Babel series of four, is concerned. This book is an excellent read, the kind whose characters live with you well after you’ve put it down for good. Perhaps Senlin Ascends is one of those rare novels which excel so completely at surprising and thrilling many of its readers that words all of a sudden elude you.

Then again, maybe it’s the sort of read you need a few days to process. And process I have. What did I come up with during those few days?

Senlin Ascends is an excellent novel that doesn’t fall into any one genre checkbox. We can spend all day discussing its Victorian influences and steampunk elements, but at its core, this is (the beginning of) a story of a husband doing everything in his power to find his wife.

Senlin is the headmaster of the only school in the small town of Isaugh, a man ‘at the edge of things,’ a man of reserved judgement who looks on his fellow residents as uneducated and treats them somewhat like children, to their mild disdain. He only recently married the beautiful, talented and lively Marya, described as:

Marya was a good match. She was good-tempered and well-read; thoughtful, though not brooding; and mannered without being aloof. She tolerated his long hours of study and his general quiet, which others often mistook for stoicism. He imagined she had married him because he was kind, even-tempered and securely employed. He made fifteen shekels a week, for an annual salary of thirteen minas; it wasn’t a fortune by any means, but it was sufficient for a comfortable life. She certainly hadn’t married him for his looks. While his features were separately handsome enough, taken altogether they seemed a little stretched and misplaced.

She played the piano beautifully but also brutally. She’d sing like a mad mermaid while banging out ballads and reels, leaving detuned pianos in her wake. And even still, her oddness inspired admiration in most. The townsfolk thought she was charming and her playing was often requested at the local public houses. Not even the bitter gray of Isaugh’s winters could temper her vivacity. Everyone was a little baffled by her marriage to the Sturgeon.

Not much time at all passes before Marya and Senlin lose track of one another, in the very foundation of the massive structure that is the Tower of Babbel, the setting — and, in a way, the prime antagonist — of this fantastic story. Senlin has had a deep fascination with the Tower for most of his life, having bought into all those books proclaiming the Tower of Babel the greatest accomplishment of humanity. Senlin’s trusted Everyman’s Guide to the Tower even describes it so:

The Tower of Babel is most famous for the silk fineries and marvelous airships it produces, but visitors will discover other intangible exports. Whimsy, adventure, and romance are the Tower’s real trade.

Ah, how wonderful it sounds, how exciting! If only reality were so…
Senlin’s obsession with the Tower will cost him, as its true guise is much different from what he’s imagined and read about throughout his life. His wife lost, Senlin is forced, after a period of dumbfounding shock, to begin his ascension of this great structure. 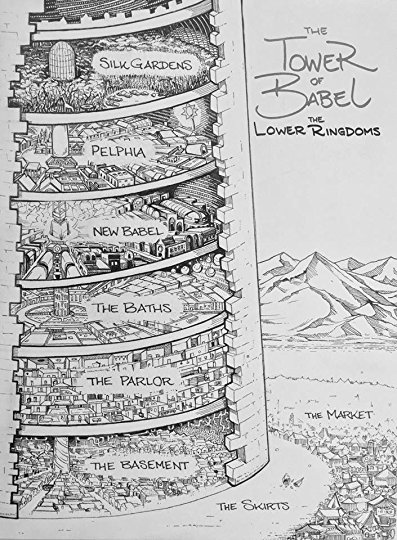 Along the way, questions will pile up. Who built the Tower, and just what is its purpose? These lay on the wayside, however. More central are the myriad questions, which shove and prod Senlin at every corner, forcing the well-meaning but cowardly teacher to grow and change in order to survive and follow Marya’s trail. Despite the trials and tribulations in his path, what Senlin retains is a core of decency, compassion and the belief that the Tower’s destructive influence doesn’t necessarily erode everything good and decent in people. It’s this belief in men and women that forces them to do better, to meet him half-way.
Senlin’s growth, in fact, is one of the main reasons this novel pulled me in so thoroughly. It’s no small feat, making a likeable person look completely unprepared and incapable of dealing with a situation, to have all his positives turn into flaws to disastrous effect, only to see him realize all this and, step by step, rebel against it, becoming something of a charming rogue by the end. (Bit long-winded, that sentence.)
Mysteries abound in the form of indebted slaves called ‘hods,’ a terrifying gentleman monster playing at Dr Jeckyll/Mr. Hyde called Red Hand, four ringdoms, levels of the Tower, each under different authorities, built for different purposes, and so on.
Plenty of side-characters are to be found, all of them excellent. My favourites have to be Edith and Tarrou, the latter’s description:

A two-pointed black beard accentuated his iron gray mane of hair. He seemed hale and athletic for a man his age. Senlin was a little intimidated by the width of his chest and shoulders, though his smile seemed amiable enough. “And that is the dazed look of a man fresh from the monkey pen.” He gave an exaggerated shudder. “The Parlor is an awful place.”

The prose is nothing short of exceptional. Bancroft’s sentences flow easily and present a clear view into another world, a world that is sometimes beautiful, sometimes unspeakably ugly and nearly always bizarre. It will set your imagination on fire, both with its adventurous streaks and with the darker undertones Senlin Ascends is rich in.
In short, Senlin Ascends is excellent and well worth your time and hard-earned cash. It’s even worth your tiny sum of pocket money, if you make no cash what-so-ever.
I can see why it has as much hype as it got; I’m almost sad to have found it only now that a big publisher has republished the first two books and will soon publish the third (in September). Now that I’ve started, I can’t wait for the last two books of the series to hit the shelves!

The simplest way to make the world mysterious and terrifying to a man is to chase him through it.

In this, Josiah Bancroft certainly succeeds…even if Senlin Ascends doesn’t always feel like a chase, it’s one hell of a ride. There I go, mixing my metaphors again.
Thank you for reading this review! I’ll be back with a review of the second book in the Tower of Babel series as soon as I finish reading it! Now I’m off to read it!
P.S. Action scenes! Excellent bloody action scenes!
P.P.S. Six seasons and a movie!

One thought on “Book Review: Senlin Ascends by Josiah Bancroft”