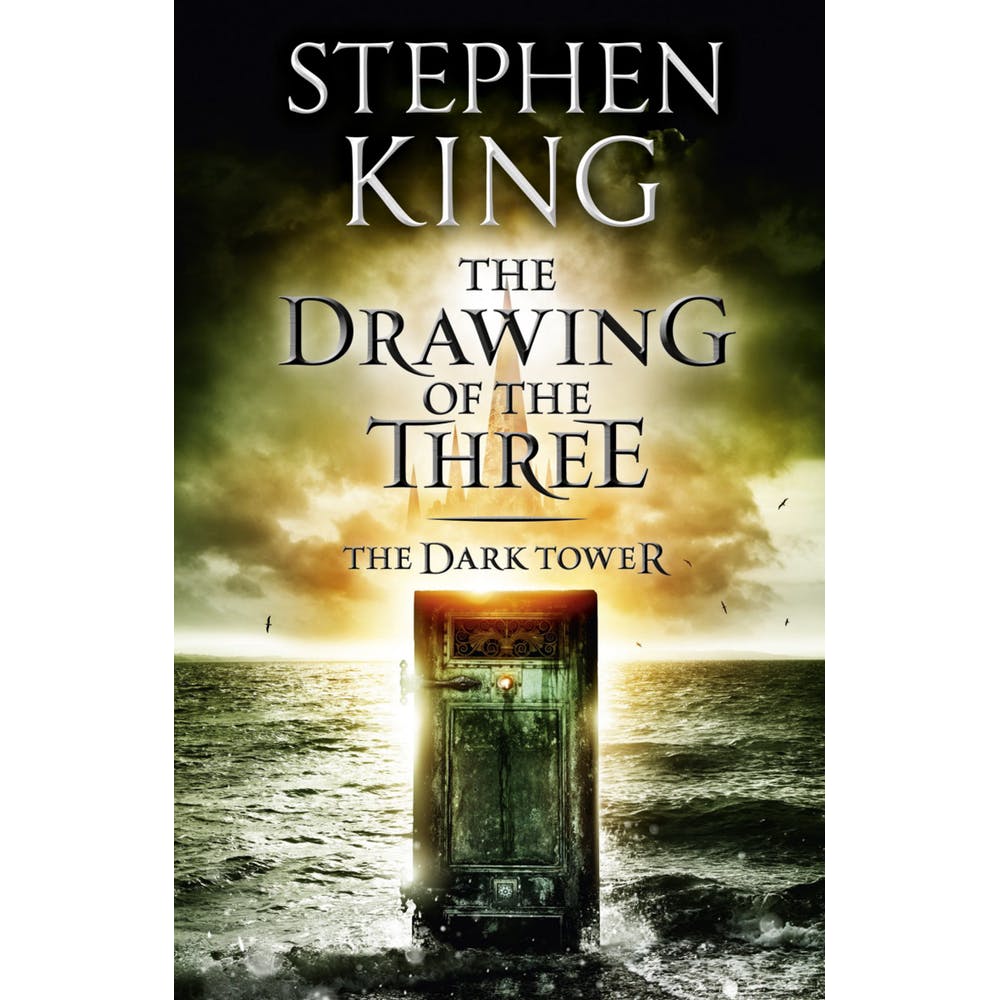 So fond, in fact, that I’m taking considerable time from an unfortunately busy schedule to reread and finish it (on my first read, I lost the thread at book 6, The Song of Susannah). I’ve already spoken about The Gunslinger, and the bell strikes for a recommendation of that second Dark Tower book, The Drawing of Three.

Three people. Two men and a woman. A druggie, a cripple and a serial killer. Three compelling stories crossing the borders between worlds and time, bonding three together, and changing the fate of a fourth.

The intersection of the three, the one that draws them is none other than the gunslinger Roland, maimed and severely weakened by fever due to an infection running rampant, poisoning his blood and clouding his mind.

On a beach, Roland finds a door. A door that, once opened, leads him into the mind of another — the drug addict Eddie, a young man ridden by a demon known as cocaine. Now he is ridden by Roland, also, and you better believe that a stinkin’ drug doesn’t stand a chance against the last gunslinger of Gilead.

The second door leads to a New York different from the one Eddie knows, the Big Apple of the sixties. Meet Odetta Walker, a black crippled woman with no legs, and the heiress of a fortune. Odetta is a proper, if slightly uptight young lady but there’s a catch — she’s a schizo. Not that she knows it! No, far from it. What could possibly go wrong?

As for the third…I think I’ll say no more about him than I have already. It’s a thrilling third act to this second chapter of Roland Deschain’s quest for the Dark Tower.

If you’re familiar with any of Stephen King’s prose, you’ll know what to expect — clear, concise writing that absorbs you with ease. Putting the book down was downright impossible, at times. As far as the re-read goes, I was surprised to find so much material I’d originally overlooked. Now that I have a lot better idea of where the story is going, I found a lot of foundation building, not just the obvious kind but also that more intricate, subtle sort.

Baldur's Gate 3 is currently in Early Access, meaning that the game's first act is playable but actively being worked on. As a result, it's got bugs, lots and lots of bugs - funny ones and weird ones, even downright bizarre ones - and I'm going to highlight several of them for you. I do my best to play through every major patch of the Early Access builds before I go back to locate all the weird, funny bugs I’ve come across, and share them with anyone looking for a laugh. This is a six-minute video condensed out of my 30-hour Ranger playthrough, back in January; somehow, combing through tens of hours of footage never gets any less of a chore, so I’m a month or two later than I thought I’d be. Anyway, here’s to hoping some of you out there enjoy this one!
Reading Giant Days ruins other comic books for me. John Allison is a brilliant scribe, and Max Sarin infuses every panel of this phenomenal slice-of-life series with charm! 🤩
"The Jiya have had peace for a thousand years—until their ancient enemy, the Egril, strike back with a vengeance, wielding the same magic that was once the Jiya’s ancestral right. In less than a week, the Jiya people and their proud Shulka warriors are decimated and under the yoke of their new conquerers. So opens Mike Shackle’s We Are the Dead—and I can’t promise you things will look up for our brave heroes anytime soon!"
When I picked up Jane Yolen's Briar Rose, I did not fully realize how hard it hits. I knew I'd wanted to read this book for a long time, but I'd all but forgotten the conceit at its core--rather than your run of the mill retelling of Sleeping Beauty, Briar Rose frames the centuries-old fairy tale as the key to a mystery whose origins protagonist Becca traces back to the horrors of the Holocaust.
Ursula K. Le Guin’s The Lathe of Heaven asks not only “Can we imagine the future?” but “What is the price for that future?” It’s a brilliant work, revolving around the relationship between George Orr (who may or may not be a reference to George Orwell) and his psychiatrist, William Haber. Bend me your ear and listen to the video for a few minutes – might be I’ll catch your interest yet!
If there's a fantasy universe I unabashedly love, it has to be Joe Abercrombie's First Law. Have I not said-and very recently, too, that few writers are at once as brutal and gripping as him. Have I not described his action as visceral, his characters as fatally flawed, his world a miserable place that I shouldn’t want to inhabit, yet do?!