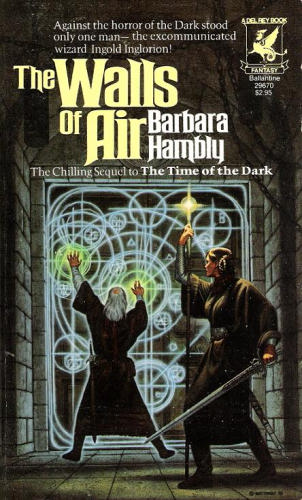 Ah, recommending the second book of a trilogy, that’s a new one for this blog!

The Walls of Air is the second novel in Barbara Hambly’s Darwath trilogy. The second book of a trilogy is always a bit tricky; you have to find a balance between answering some of the questions that the first novel set up while setting up the final stage of the final book.

Barbara Hambly manages to do just that in an admirable way. Our main characters — Ingold, Rudy and Gil — all face considerable challenges and each of them grow and change; some in ways that you’d expect, while others might surprise you. What Ingold goes through at the end of the novel, in particular, changes him into a much darker, more cruel version of himself; a version that was only hinted at, previously.

I won’t go into detail, but it’s an understandable transformation which feels very much ‘earned,’ if you will.  Appropriate. So it is with Gil and Rudy, whose transformations are more gradual and less…contested.

The first storyline deals with Rudy and Ingold’s journey to Quo, the Magical Capital/College of the world. I didn’t quite fancy Rudy as much as Ingold or Gil in the first book, but this storyline had me rooting for him time and time again. Our San Fran wizard’s apprentice is quite a charmer, that’s for sure.

Gil has some problems of her own in the Keep, overshadowed only by her proclivity to scholarly work, and her ability to see patterns early enough to make her brilliant but late enough not to resolve the tension over Rudy and Ingold’s quest.

Hambly’s prose is once again splendid. I read it with such ease that it’s a challenge not to lose myself and any notion of time when I’m within the confines of Darwath’s fantastic world.

I could say so much more about it…but I’m afraid to spoil a great experience for you. I’d really rather not do that, so you go ahead and read it!