The original Life is Strange was my favorite game for 2015, a year that was decisively NOT lacking in strong titles. Novice time-traveler Max and her best friend  Chloe’s story touched me in a way few games had before and few games have since. It was a narrative rich with humor, feelings, personal tragedy and a friendship that was very well worth the ultimate sacrifice. If you haven’t played it, I won’t spoil said sacrifice but, needless to say, you really should.

Before the Storm is not a sequel of Max’s story. It’s a prequel, centered on the (arguable) protagonist of Life is Strange, Chloe Price; the game takes place three years before Dontnod Entertainment’s narrative masterpiece, during one of Chloe’s lowest points. Alone, friendless, unable to move past her father’s death, Chloe gets into some pretty serious trouble for, of all things, spilling a beer.

Who’s to help her out but Rachel Amber, major character/mystery in the original Life is Strange, and Chloe’s best friend, after Max moved to Seattle. In the simplest terms, Before the Storm is about how these two characters meet, and the relationship between them.

This new entry into the franchise is not developed by Dontnod Entertainment, but by Deck Nine, the former ‘Idol Minds,’ a studio best known for the Ratchet&Clank PlayStation 3 collection, which–let’s face it–isn’t a lot to go by on. They recently announced that they’re switching gears towards creating narrative-led projects and, if Beyond the Storm is anything to go by, Deck Nine might just be a studio to watch out for.

The more I think about it, the more I find myself drawing parallels between Life is Strange and Before the Storm. Both games begin with someone whose destiny is intertwined with Chloe’s, getting her out of major trouble; and while this time, time-travel is out of the question, Beyond the Storm is never the less steeped in the supernatural. These elements have, by now, become such a fundamental part of Arcadia Bay’s DNA that to have a game set in this setting but lacking in them would be tantamount to a crime.

Many of the characters Max met in Life is Strange are here; only, instead of seniors, they’re all freshmen and so are younger, less skilled in the art of being bitchy; but not for lack of trying. I’m speaking of course, of Victoria Chase, with whom you can chose to interact at one particular moment in Episode 1; she’ll call you Kari Price, even though she’s well aware of your real name. Although, I should say without spoiling the fun…screwing with someone in high school is never a one-way street. Take from that what you will.

Two original characters that never crossed Max’s path in LiS are worth mentioning: Steph and Mikey, a geeky duo of friends who play D&D and are absolute, adorable geeks. There’s an optional 20-minute scene between these two and Chloe which might very well be my favourite light scene in the entire episode.

Speaking of Chloe, three years before the events of Life is Strange is an interesting time to pick control over her; as I said earlier, it’s a very low point for our heroine, and being able to see, hear and even decide what goes on in her head once again reinforces that while she’s got a ton of baggage (and rightfully so), Chloe is also a very cerebral character. It’s the fact that this is hidden behind her tough-nut shell that makes her all the more compelling. 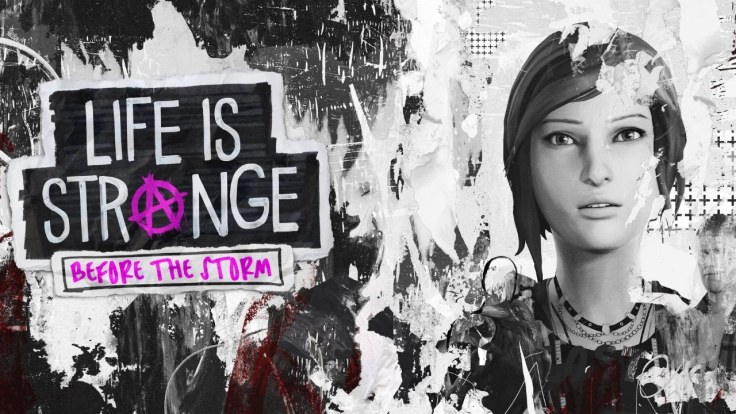 Beyond the Storm is a little over three hours long, if you do every single conversation and look for all of the optional graffiti you can draw on walls, trains, cars, toolboxes, and whatever the hell else there is to draw on.

I’ll write a lot more about Before the Storm, and I’ll revisit Life is Strange by making a long video essay at some point in the future–probably when Before the Storm is out in full, so as to be able to create a thoughtful comparison between the two.

What I can say, based on this first Episode is this — Beyond the Storm is faithful to its predecessor in the best ways. Deck Nine has succeeded in recreating the touching narrative that made Life is Strange a hit, proving that lightning does indeed hit twice.

It’ll set you back 17 euro or $20; two more episodes are coming, with a bonus Mini-Max story for those that have pre-ordered the game, like yours truly. I know, I’m a sucker… But it’s worth it.

In this first ever review of my review of the excellent ALL SYSTEMS RED by Martha Wells, I remind you why this novella is an enjoyable read, while making fun of myself, a lot. And, of course, topical booktuber that I am, I had to comment on the topic of the day - authors throwing temper tantrums over four-star reviews of their books!
Baldur's Gate 3 is currently in Early Access, meaning that the game's first act is playable but actively being worked on. As a result, it's got bugs, lots and lots of bugs - funny ones and weird ones, even downright bizarre ones - and I'm going to highlight several of them for you. I do my best to play through every major patch of the Early Access builds before I go back to locate all the weird, funny bugs I’ve come across, and share them with anyone looking for a laugh. This is a six-minute video condensed out of my 30-hour Ranger playthrough, back in January; somehow, combing through tens of hours of footage never gets any less of a chore, so I’m a month or two later than I thought I’d be. Anyway, here’s to hoping some of you out there enjoy this one!
Reading Giant Days ruins other comic books for me. John Allison is a brilliant scribe, and Max Sarin infuses every panel of this phenomenal slice-of-life series with charm! 🤩
"The Jiya have had peace for a thousand years—until their ancient enemy, the Egril, strike back with a vengeance, wielding the same magic that was once the Jiya’s ancestral right. In less than a week, the Jiya people and their proud Shulka warriors are decimated and under the yoke of their new conquerers. So opens Mike Shackle’s We Are the Dead—and I can’t promise you things will look up for our brave heroes anytime soon!"
When I picked up Jane Yolen's Briar Rose, I did not fully realize how hard it hits. I knew I'd wanted to read this book for a long time, but I'd all but forgotten the conceit at its core--rather than your run of the mill retelling of Sleeping Beauty, Briar Rose frames the centuries-old fairy tale as the key to a mystery whose origins protagonist Becca traces back to the horrors of the Holocaust.
Ursula K. Le Guin’s The Lathe of Heaven asks not only “Can we imagine the future?” but “What is the price for that future?” It’s a brilliant work, revolving around the relationship between George Orr (who may or may not be a reference to George Orwell) and his psychiatrist, William Haber. Bend me your ear and listen to the video for a few minutes – might be I’ll catch your interest yet!