Have you ever dreamt of being the head cultist and spiritual leader of a small post-apocalyptic village, working to awaken your great patron-god, Chernobog? Was your dream colored in Lovecraftian greens?

No? You’ve no clue what I’m talking about? Well, I can’t say I blame you.

This is the Shrouded Isle, a game with this exact premise. It’s a bit more complex than picking a villager and ending their life; each one has minor or major virtues and vices, which affect you in positive and negative ways, respectfully. Each run of the game is broken up in 12 seasons–it takes place during 3 years– during which you have to sacrifice 12 of your fellow villagers.

The villagers, there’s thirty of them, and none come from the most distinct genetic material; each is a member of one of five families, whose primarchs control some different suppression apparatus — the Iosefka family is in charge of the fervor in the village by building monuments and spreading the holy word of Chernobog’s imminent return, the Kegnni make sure that your villagers remain proper and ignorant, and so on and so forth.

It’s a game about information, and acting upon it. During each season, you’ve got three months to vote on the activities your cultists make. While you’ve got five councilors — one from each esteemed family on your shrouded isle — you can pick to work on one to three of your councilors’ activities each month; the more the activities worked on, the lesser are the returns for you. It’s a perfectly logical system that allows you to discover more about your villagers’ vices and virtues at only a small cost.

Vices and virtues are also found out by inquiries, of which you will get some, as long as you’re in good standing with the different houses; it’s always difficult to decide whom to use your first couple of inquiries, on account of knowing virtually nothing other than some cursory flavor text, give n to you by the house leaders whenever you scroll over the members of the family. 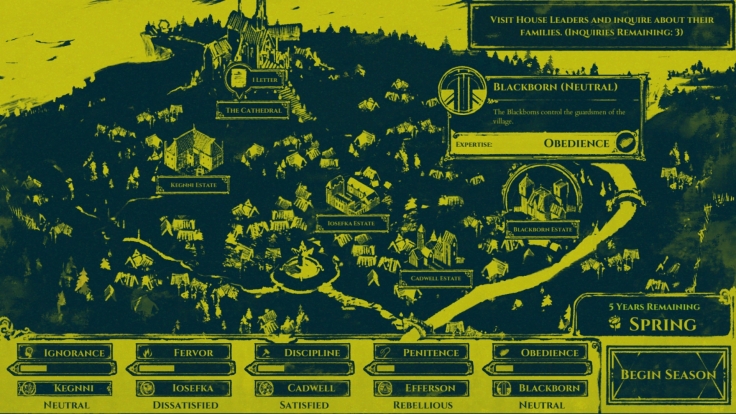 Villagers and the five attributes of the entire village–Ignorance, Fervor, Discipline, Penitence and Obedience–are not the only ones you have to be on the lookout for; each house also has an approval rating that raises when you continually vote for their advisers, and falls whenever you ignore them. Approval also plummets whenever you decide to sacrifice someone; particularly if you have no proof, or even an idea, of an advisor’s transgressions.

‘This might all seem like a lot to follow, and I did have some difficulty making sense of it all during my first game; which is why one of the families quickly rose in revolt, and did me in, thus ending playthrough #01. That said, once I began all over again, it made sense and, in less than two hours, I stood above the precipice, awakening good old ‘bog and watching him as he stretched those holy wings of his.

The Shrouded Isle is all about revealing information one month at a time, and using that information to the fullest. There’s no overarching storyline, when one really could’ve worked quite well.The art-style is good but minimalist, and there are about…eight screens in the game overall, with an additional three-four cutscenes.

It’s entertaining for what it is…but I’m not certain that it’s worth the price tag of 10 euro. That has to be its biggest weakness; the Isle simply doesn’t have enough content. After my two and a half hours, I have absolutely no desire to go back and replay it in its current form; if the developers introduce a content-focused patch, perhaps I will.

The Shrouded Isle is an interesting experiment that’s built around a cool concept, strong aesthetics and ambiance, but hobbled by lack of variety and lacking a cohesive story.

Should you play it? Only you could say that, and I hope to have provided all the tools necessary to help with your decision. Happy Gaming!

PS: I know there are different endings–but I didn’t feel curious enough to spend another few hours unlocking them.